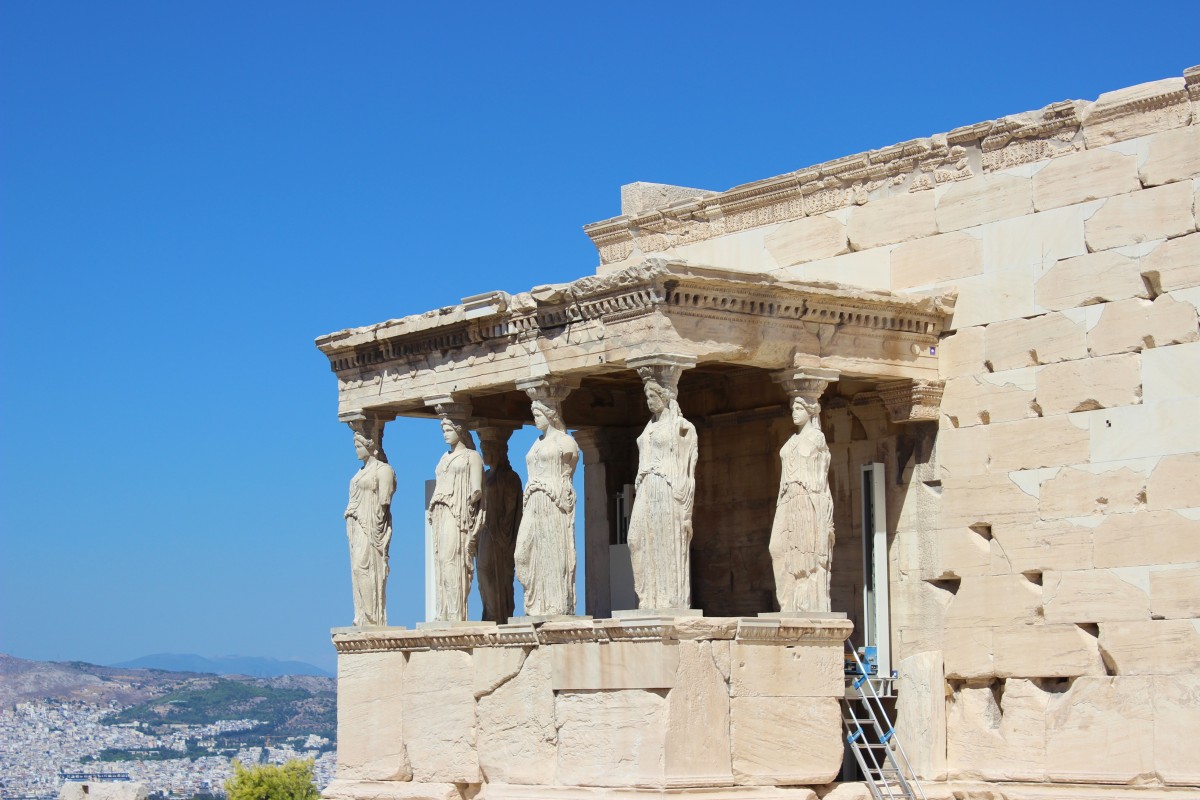 Athena Pallas, divine symbol of wisdom, virtue and military discipline was born in full armor out of her father’s Zeus head with a spear in her hand. She and Poseidon, her uncle, commander of all waters, ended up claiming the same city which was to become the renowned city-state, cornerstone of Western Civilization and birthplace of Democracy. In a contest between them, Cecrops, the first native king of Athens, chose Athena as the city protector because her offering – an olive tree – was that of peace (symbol of fruit, oil and wood) while Poseidon offered a salty water spring. The city was named after Athena and this is how our tale begins…

Plato quotes ancient Egyptians who describe Athens being a powerful city since 9,600 B.C. Nobody can tell when exactly the city of Athens acquired its name or how long its history is. King Theseus united twelve of Attica’s settlements into one and established Athens as the capital city. He divided the population into three castes i.e. “Eupatrides” (nobles) the educated rich people; ”Geomorous” the farm and cattle owners and “Demiourgous” the craftsmen. With time, the city in connection with the port of Piraeus became a trade centre and gained in power and wealth. There the ancient Greek intellectual heart starts beating: Literature, Philosophy, Arts, Science and of course Democracy which marked the world history. During that Golden Age 400,000 Athenians sailed the Mediterranean with 470 triremes and ruled over 20 million of allies and subjects. Athens became the centre of SE Europe influencing the islands, the coasts of Asia Minor, Sicily, Magna Græcia, Provence and Spain.

Athens-Attica is strategically located right at the centre of the Greek and Mediterranean, region at merely 20m above sea level. The city lies protected in the “arms” of the surrounding mountains (Parnitha at 1.410m, Penteli at 1.108m, Hymettus at 1.072m, Aegaleo at 476m). Its position, wisely chosen from the start, ensured the well being and safety of its citizens, who in critical moments could flea southwards to the sea, with the islands of Argosaronicos bay being only 50 nautical miles away. With such a strong and safe home, the Athenians easily expanded and conquered the known world.

None of the essentials was ever missing from Athens or Attica. There could never be a more peaceful location, protected from strong winds, with the sun shinning brightly most of the time and a beneficial climate to people’s health, as this. Attica is surrounded by calm sea waters with quiet natural ports and shallow beaches which served as shipyards or naval bases during war time. The city hills (the Acropolis, Areios Pagos, Colonos Agoraios, Nymfon and Pnyka, Lycabettus, Filopappou, Ardittos, Sicelias, Strefi, Tourkovounia) were beneficial; each in a different way. Some bore beautiful forests, small rivers or lakes; others supplied the people with marble and mining products while others bore their crop. For centuries the greater Athens area had been supplied in abundance with drinking water, fresh green and dairy products, fish and sea food, wood, marble, silver, lead and clay, all of excellent quality, used by the people for their homes, temples, theaters, stadiums, war ships, statues, amphorae and everyday utensils.

Pausanias wrote that during the era of prosperity, on the pavements of Athens one could count more statues than people! The philosophers, orators and great masters, were teaching and discussing freely on the streets. At the Agora, the Temples, the Gymnasiums, the Stadium, the Theatre or the Vouleuterion (House of Parliament) the city was pounding with intellectual and financial activity. Education was completed at 18 years of age and included -besides reading and writing- Mathematics, Poetry, Literature, Painting, Music, Dancing, Singing, Sports and Civics. For two more years, each youth had to study closely the rights and duties of citizenship. At the age of 20, they had to pledge allegiance to the city laws, respect for their ancestors’ values, bravery in battle and a life long dedication to the progress of Athens. Fully prepared and aware of their responsibility the youngsters could then vote on every city council issue. Many would choose to further their education next to a great master.

It is, therefore, not by sheer luck this city nursed great minds whose names marked permanently the world history; men who established the basic principles for today’s life and the natural world as we know it. They were philosophers, historians and orators like Socrates, Plato, Demosthenes, Antisthenis, Thucydides and Xenophon; artists, poets and playwrights like Praxiteles, Pheidias, Aeschylus, Aristophanes, Euripides, Sophocles; legislators, “fathers” of Democracy and army generals like Pericles, Solon, Cleisthenes, Aristides, Miltiades, Alcibiades or Themistocles.

The perfect intellect, the big ideas, the moral principals, the inventions, sciences, arts and philosophy of the Greeks had a deeply religious character and formed the guideline for global Knowledge. The construction of the Parthenon, for instance, which was meant to be the great temple-symbol of goddess Athena, was performed by the two renowned architects, Iktinos and Kallikrates. Allegedly the temple reached architectural perfection due to the ancient mystic knowledge and techniques employed by the two constructors.

Centuries later, during the Enlightenment, great minds in Europe and the most distinguished librarians and universities of the world discovered this precious for all mankind Athenian inheritance. For centuries, every important book in the world refers to what was either first conceived and formulated or invented by ancient Greeks and the Athenians. It is a remarkable fact that modern Greeks still use unchanged many of the ancient words Homer used in his poems in 800 B.C. and our children are still taught Homer’s Odyssey and Iliad like the children in ancient Athens. Scientific works and spiritual books like the Bible are either written in Greek or use Greek terms to express their meaning in full. All these facts make Greek a “living” language for all mankind. As a tribute, we use in this book a few international Greek words which begin with the letter A (e.g. Athens, Attica, Argosaronicos).

Visitors share special moments of the city life with the people of Athens. They may enjoy together the view from one of the many high places, admire the eternal monuments that are scattered everywhere, or they can just take a walk around a quiet neoclassic neighborhood. Sometimes they walk side by side in archaeological sites or around the narrow streets of the old town; they search the libraries, the museums and houses of Art or attend some play or musical performance in magnificent ancient and modern theaters.